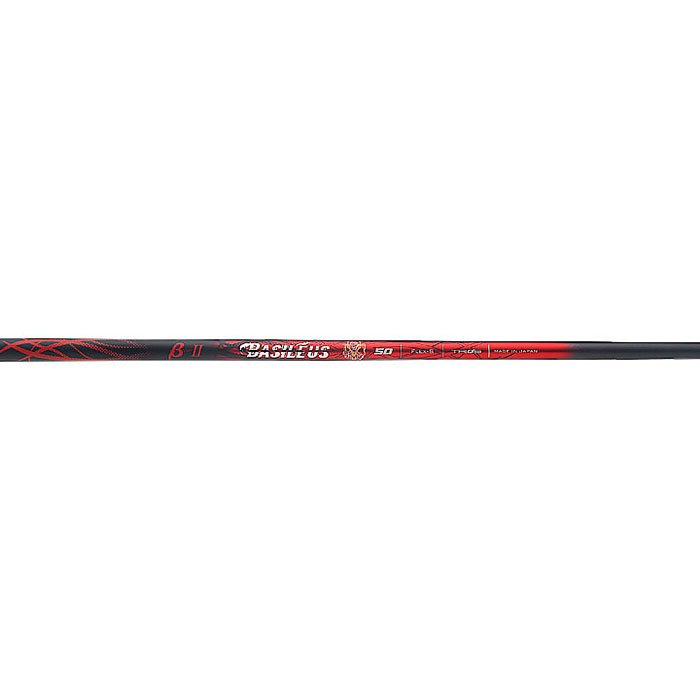 Tour approved strong trajectory "First Basileus β" evolved after 5 years. Evolution to meet the demands of "ride," "hit," "manipulate" tour professionals. The double bias of 80t super high elasticity fiber + high elasticity 40t adopted for that purpose, and super high elasticity 70t cross sheet is arranged at the tip bias. "Improved operability" due to the newly placed fine flexibility. "Riding" the ball with a mechanical action at the tip. Convert the thick "push" impact of hard hitters into flight distance. "Basileus Beta II" will be the best weapon to make it a reality.

Classification in "AB map". Designed to control the power of hard hitters and to withstand heavy impacts by suppressing the overall bending of the hand, middle, and tip.

The C/B value, which is an index of the feeling of bending from the hand to the middle part, is 0. 64 (60/S) and hard set. T/C value, which indicates the ease with which the ball is caught, is 0. It is set to 60 (60/S) and is a setting that cancels the anxiety about "left". The main concept is to react linearly to the swing of a hard hitter, but with a low torque design, we pursue a design that makes it difficult for mistakes to the left to appear even if you hit it hard. Hard hitters can feel the required thick impact.

The design that produces mechanical flexibility in the specific part of the tip part that inherits the characteristics of β that is the previous model is followed, and the bending of the hand part that enables control by wrist work is also added. However, these are not the designs called simple double kicks, they are too delicate to call double kicks, and they are "golfers are the main players". It is designed to "control all of the shaft" with the main focus on. In this model, 40g unit "lightweight and high rigidity spec", which did not exist in the previous model, is added, and 50g unit athlete lineup 50-X is also available. It can be said that it is a reliable shaft that matches hard hitters due to the rigidity and thick impact due to the design utilizing the latest materials.

- Achieves an optimal lineup for target golfers by designing base material used according to specifications.

- Low torque and stable running produced from each model and optimal material layout.

- The overall behavior is stable, matching the hard hitter who attaches importance to the rigidity of the tip.

- High rigidity throughout the entire length. Put on and beat. The high-dimensional ball hit control.

- The behavior at hand is stable and matches the hard hitter who attaches importance to the feeling of running that the tip follows.