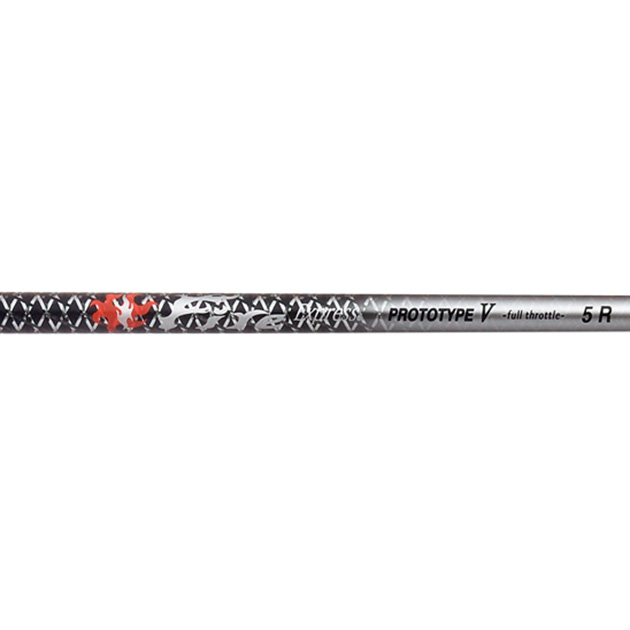 Fire Express (hereinafter referred to as FE) has entered the 11th year of its brand debut.

Fire Express series has quickly adopted cutting-edge technologies and materials such as multi-axis braid, nanoalloy technology, and TORAYCA® T1100G to create high-performance shafts. This time too, the speedy development team is demonstrating its power. In order to lead a new era, Toray's cutting-edge material "TORAYCA® M40X, a carbon fiber with high compressive strength and high elastic modulus" has been adopted ahead of other companies in the shaft industry. For the FE series driver, "Fire Express Prototype V (Five)" was released as the fifth prototype.

In the past, when the weight was reduced or when the shaft was lighter than 50g, it tended to be soft without hardness. With the introduction of the M40X, it has become possible to arrange highly elastic threads in a straight direction, making it lighter and harder than before. In addition, 2AX SOFMETA®, a 6-axis cloth sheet, is used for the outer layer. Further stabilizes the shaft behavior during the swing. A ten-axis structure with increased rigidity by arranging a four-axis braided cloth sheet in the inner layer of the middle part. This has a double kick element that creates a tame on the hand side and runs the head at the tip. Due to this rigidity distribution, the shaft behavior during the swing is not peculiar, and it is finished as a distance performance pursuit shaft that accelerates the head while stabilizing the head behavior unique to Fire Express and increasing the meet rate.

The speed of impact is exactly full throttle (fully open). The sense of speed and the sharp feeling that could not be experienced in the past are exactly the effects of TORAYCA® M40X, which will be indispensable for future premium shafts.

The feeling at the time of shot creates a comfortable stickiness that conventional highly elastic materials do not have. The silver-based appearance is as high-quality as platinum, satisfying the sense of ownership, and it is a shaft that attracts even the viewer.

- The frequency is a guide when assembled with a head of 198 g and 45.75 inches (measured by the 60 degree method). In variable clubs, the value may change significantly due to the shallow insertion of the hosel.