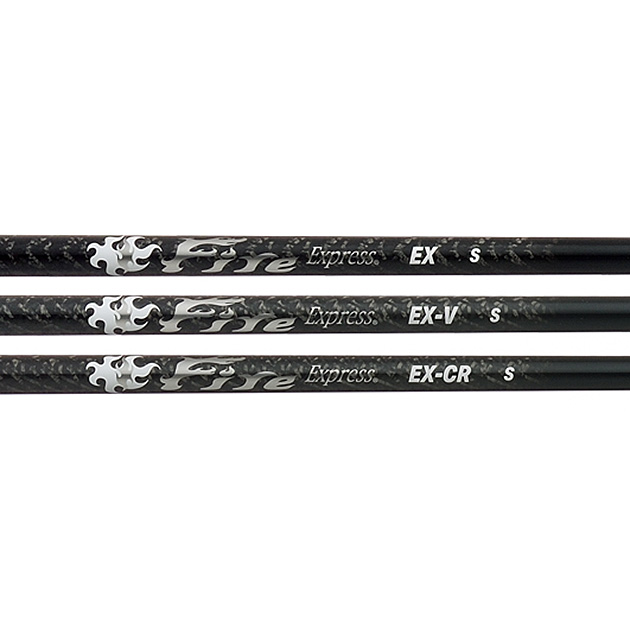 For the past few years, Fire express has developed three models of original tone shafts for each type that are compatible with the high moment of inertia heads of US club makers, which have become the mainstream. they have adopted a bold design for each target.

The top model EX is set to increase the rigidity from the middle to the tip without lowering the rigidity at hand. Even if it is used by a player with a head speed of 50 m / s or more, it can be strongly pushed in. It is designed to fly while controlling over 300 yards.

EX-V is the genealogy of TP-V and TP-V NX in the 60g range. The rigidity at hand is lowered and the rigidity from the middle to the tip is set higher. As with the conventional model, it can be turned back loosely, but it has a sharper swinging feel and a sense of speed.

EX-CR is for players who want a long-distance but are not good at running shafts. Accelerate the head near the impact while setting the hand rigidity to a low level to facilitate club control. As a shaft in the first half of the 50g range, it is finished as a shaft that makes you feel a new dimension in terms of both function and feels.

For stacking each model, cutting-edge materials such as TORAYCA® M40X, M50J, and T1100G are placed in place. In addition, EX uses 8-axis fabric, and V and CR use 6-axis braid. The outermost braided sheet is also used properly to achieve the optimum specifications.

The color is clear on the hand side where you can see the braid, black on the middle part, and black clear on the tip. While incorporating the image of the FE series, which is divided into three zones, it combines strength and luxury in a calm atmosphere.

- The frequency is a guide when assembled with a head of 201 g (including sleeve) and 45.5 inches (measured by the 60 degree method).

- The frequency may change significantly depending on the depth of the hosel insertion.