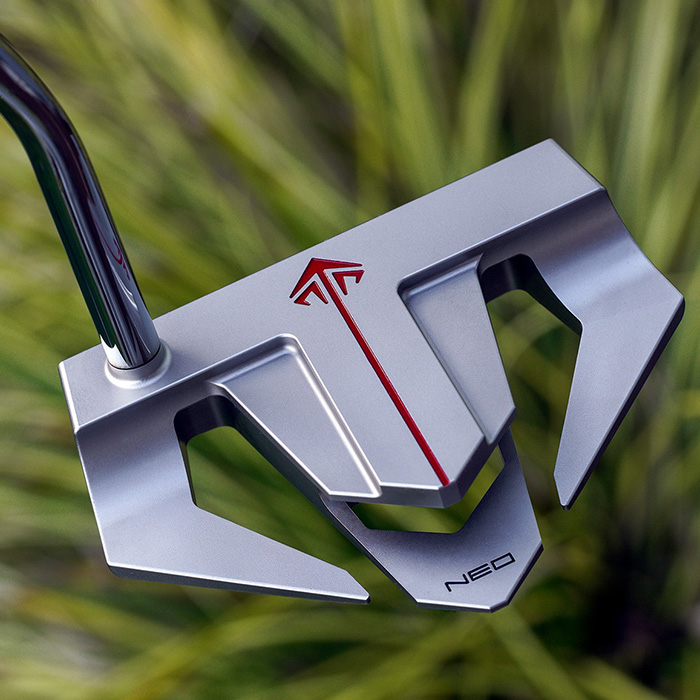 This is what it is, a single block of Japan Industry Standard Stainless milled by 5-Axis in Japan. It features a copper & tungsten weight placed on the toe side of the sole which is only visible in certain light. It’s beautiful, It’s perfect and it’s also expensive. $2900 dollars expensive.

ENTER THE SEVEN NEO
The NEO is not a high MOI putter but it is extremely forgiving as a true rolling oversized mallet. It’s Modern design has been in development for more than 2 years. There is no aluminum or plastics used in the construction of this putter.

Its details are flawless as is its simplicity. Alignment is very sharp and helps narrow your view. The NEO’s face milling is completely intentional providing zero bias in any direction while increasing the distance your ball rolls.

It’s all about the feel too. The milling pattern on the face ensures equal amounts of contact between ball and metal. The grooves are intentionally designed with optimal thickness, edges, and spacing to expel liquid and dew. At impact, the vibrations flow through its unified top-line, soft and pure, carrying its sensation into the rearward fangs.

From a performance perspective, SEVEN had a tall list of requirements to achieve. First was the aesthetics, The NEO had to appear uncomplicated and reassuring to the player. Second, it had to be made in 100% in Japan using J.I.S materials. SEVEN also wanted the NEO to be non-biased in direction with the ability to alter the neck and face balance in the future.

Importantly the NEO had to allow for a level of finesse, in early design concepts we positioned a lot of weight toward the rear end of the putter which did a lot to promote a straighter roll with less deviation yet this also added the counter effect of making the putter seem less responsive or less workable. It was a totally different experience and balance needed to be struck as is with the final product.

The photo below reveals the above tungsten ingot installed into the toe. Its color has slightly more golden hue vs the cold blue steel the rest of the head is made of. This putter could have easily been made without this unique feature but adding this detail allows an easier path to various neck designs such as plumbers neck, swan neck, short slant, and the list goes on.

If you look around in the market, there really haven’t been much in terms of ultra high-quality mallets with exotic shapes. Perhaps some in multi-material with aluminum and plastic… but meh… It seems like the high-end single material putter scene has always been centered around traditionally shaped blade putters. Well, folks, I think it’s about time that someone came up with an extraordinary design single material mallet put into shape using top-notch material with state of the art Japanese manufacturing technology.