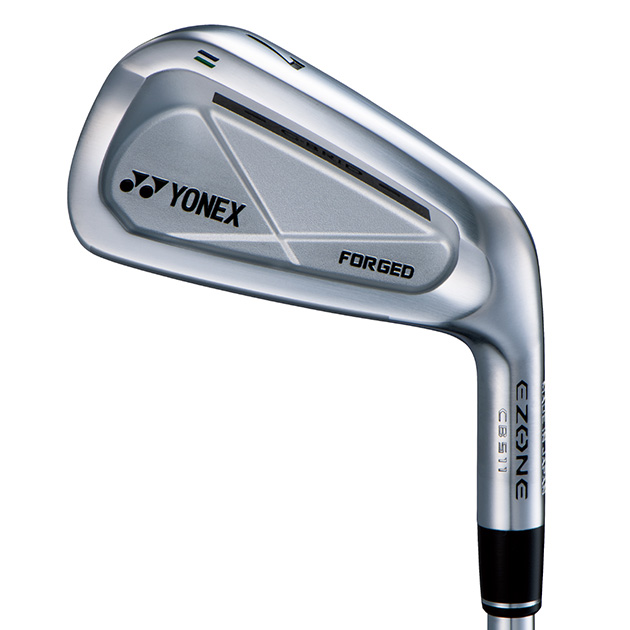 Yonex continues to manufacture products consistently at its own factories in Japan, from research and development to manufacturing. In the graphite hybrid soft iron forged iron series, which has been well-received since its launch in 2015, the "EZONE CB511 Forged Iron" for intermediate and advanced users, which has both operability and forgiveness, will be released from the end of March 2022.

This product is characterized by the suppression of vibration and the soft shot feeling created from the low center of gravity by the structural effect of G-BRID, which was originally developed for the head, and soft iron forging. "MICRO CONVEX FORGED FACE" is newly adopted for the face, which has a convex line of the precision forging method on the plane between the grooves and realizes amazing spin performance. With this new function, it is a club design that produces stable high spin even in rainy weather or shots from rough.

"3D round sole" will continue to be used for the sole. An iron that swings well, enables highly controllable shots and has the most forgiving head performance and excellent operability has been completed.

G-BRID (graphite hybrid) structure that combines a graphite damping material inside the back of the face. While suppressing vibration, it has made it possible to lower the center of gravity. Furthermore, by using the vacuum heat treatment method, the size of the metal structure becomes uniform, and a good hit feeling that surpasses that of conventional soft iron has been achieved.

The fine convex line "MICRO CONVEX FORGED FACE" of 25 μm (0.025 mm) or less on the flat surface between the grooves, which was originally developed, by the precision forging method.”Is adopted on the face surface to achieve amazing spin performance. It is not easily affected by changes in the environment during dry and wet conditions, the difference between the amount of spin and the flight distance is reduced, and stable high spin performance is possible even in rainy weather or from rough.

Adopts "3D round sole" that does not easily stick to the ground and swings firmly. There is little difference in flight distance, enabling highly controllable shots.

- This set comes with NSPRO MODUS3 Tour 105 as its standard shaft.