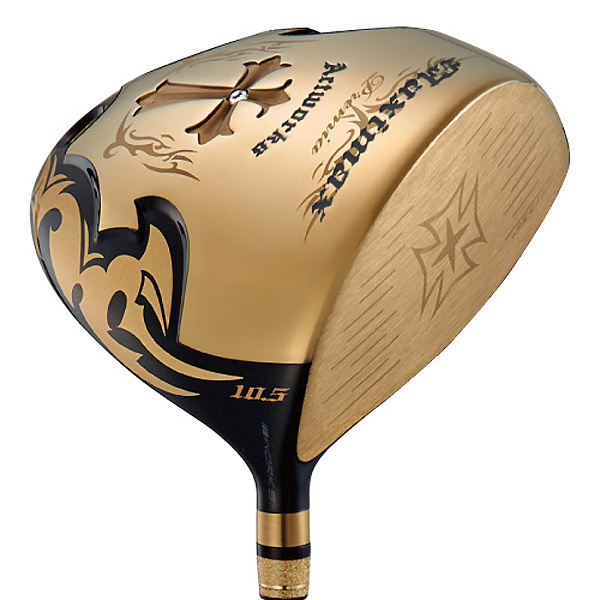 Works Golf, goes way before that all of the times has been devoted to pursuing maximum distance to the limit, and is honored to introduce the new MAXIMAX Driver. By stepping up to the next stage, the Maximax adopts our newest evolution of the Variable T-Bar Crown, which is designed to make it possible for the repulsion power to be effectively increased to the highest level, by focusing all on the impulsive power at impact onto the T-Bar area. As a result, we have succeeded in increasing power transmission efficiency up to 12%. As far as the head volume is concerned, and while it is kept within 460cc in compliance with R&A Rules of Golf, we have made the part of the crown hollow, resulting in achieving the projected area equal to and almost equivalent to a 480cc head. Also, we have extended more than approximately 20% of the sweet area with a very precise location of the center of gravity, resulting in making the high trajectory possible. With a large projected area of the clubhead, a player is able to have high trajectory with a sense of security, and feel, as if a player has clasped a short driver with ease. The extension of the sweet area coupled with making the thickness of the face plate up to 1.8 mm, has resulted in having a super-ultrahigh repulsion driver, which has succeeded in uprising the COR figure to the highest beyond 0.88. It is to say that the dream-like Driver has just been brought into reality by putting together every element of knowledge about the flight and distance WORKS had cultivated for a very long time.

By adopting the Variable T-Bar Inner Crown provided with the specified profile in the form of T is designed and raised to  the surface of the crown, with this technology that we have succeeded in achieving the highest repulsion power among all Actworks Drivers to date. The structure of the Variable T-Bar Crown enables the repulsion power to be the utmost high level, by focusing all the impulsive power at impact onto the T-Bar area. We have succeeded in increasing the power transmission efficiency up to about 12% beyond the traditional level. A very solid and high, yet incredibly pleasant sound on impact inspires one’s competence in any player.

While being very fastidious about widening the strong repulsion area, we have achieved in enlarging the repulsion area of the face more than ever by using the extremely thin-walled structure of the Press Forming Neo Titanium material which was made by means of the special production method of ultra-highly pressured as much as 5 times. As a result, we have succeeded in increasing the COR figure to as high as astounding 0.88. Coupled with the superlarge head, this face puts the flight distance capability into effect, to the result that even a miss-hits are no longer misses but hits.

By focusing the weight on the rear portion of the sole, Maxpower Weight has achieved dramatic increase in kinetic energy at impact and increase as well as the initial ball velocity. In addition, enlarging the sweet area by locating deeper the center of gravity, we have succeeded in making it possible for a player to no longer lose distance when one miss-hits, and for a player to boldy experience the ideal high trajectory with low spin.

This Driver is head only but some shafts will be available as option.