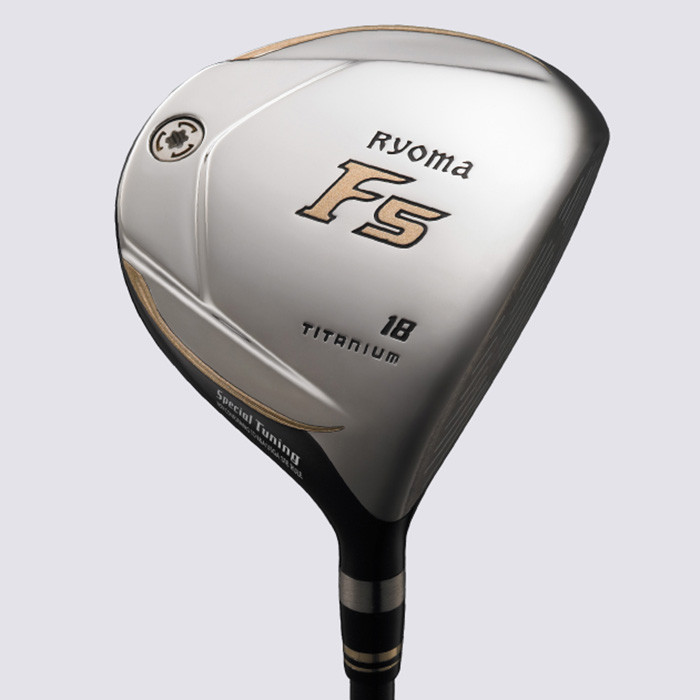 Ryoma has added enhancements to the already-high-performing RYOMA F fairway wood to make the RYOMA F Special Tuning fairway. This fairway is equipped with a high-COR multi-beam cup face that imparts to a ball an initial velocity of 1.1 m/s higher than the original RYOMA F at impact. The use of lighter head body results in a surplus weight of a whopping 130 g. At the front and back of inside the head are placed a low-spin unit and an anti-roll power booster, each weighing 65g, to provide an incredibly low and deep center of gravity to the head.

The RYOMA F Special Tuning fairway makes it possible to hit a ball with an initial velocity of up to 3.1 m/s higher than conventional conforming fairways and to reduce the amount of backspin imparted to a ball at impact by up to 850 rpm, resulting in an extra 20-yard long distance of ball flight on average.

Most conventional Fairways equipped with a head body made of stainless or maraging-steel make a sweet spot is higher than the center of gravity; it makes incapable of hitting a ball with the center of gravity. With conventional head, the face directs downward at impact. This is one of off-center hits that makes energy off and increase backspin rate. A RYOMA F fairway wood incorporates RYOMA’s proprietary DSI technology; an innovative head structure made of ultrathin, high-strength hot-forged titanium. The total 125 g weight made the center of gravity aligns perfectly with that of a ball at impact. RYOMA’s deep face head gives the head a deep and low center of gravity and maximizes the inertial moment. This powerful inertial moment imparts substantial energy to a ball upon impact, which, as a result, takes a straight flight over a longer distance.

The combination of an under-press crown, a 60 g low-spin unit, and a 65 g anti-roll power booster lowers the center of gravity of the club head. And the spring body transfers maximum energy to the ball at impact. This innovative head design brings the ball’s backspin rate down by up to 850 rpm. As a result, the ball is given a higher initial velocity and a higher trajectory and takes a straight flight to the green, even in crosswind.

- Comes with Tour AD RF2 as its standard shaft

- This is Ladies Version