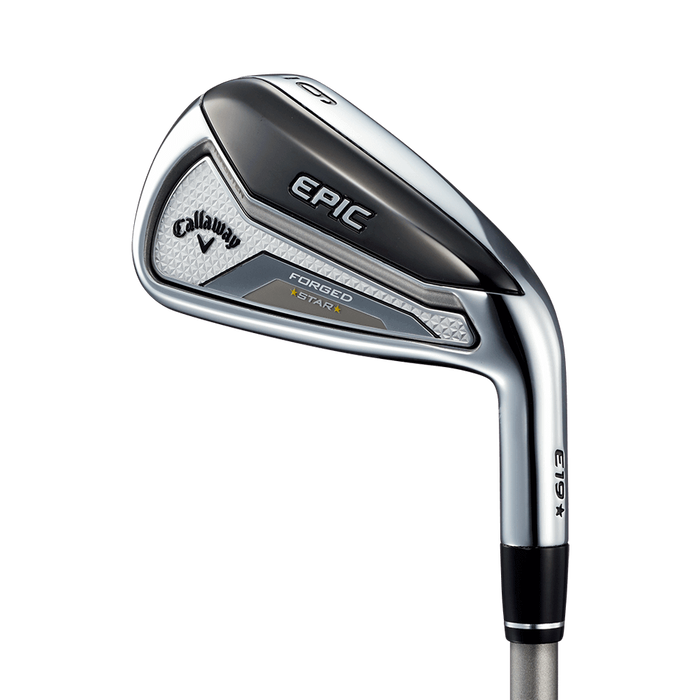 Introducing Callaway Epic Forged Star Iron. The biggest point is the flight distance performance that boasts the greatest Callaway history. By adopting "Suspended Energy Core Technology", a new mounting method of tungsten inner weight, the center of gravity position is optimized more than before, and the combination of Strong loft and 360 face cup makes it overwhelmingly high launch , Low spin and the initial ball speed. The ballistics of the “flying iron” concept further extend the ballistics, bringing the golf of many players to a new dimension.

The point of the greatest evolution of "EPIC FORGED STAR iron" is at the bottom of the face. That is the newly introduced "Suspended Energy Core Technology". This time, TPU (thermoplastic urethane) is wrapped around the tungsten inner weight, which was conventionally installed in the lower part of the head. This has made it possible to place the center of gravity accurately at a more optimal position. The result is an amazingly high launch, low spin ball.

The tungsten inner weight encased in TPU (thermoplastic urethane) used in “Suspended Energy Core Technology” has another advantage. Conventionally, when metals are in contact with each other, such as tungsten and body, the sound and feel of the sound may be hindered, but TPU has solved this problem. In addition, EPIC FORGED STAR irons are also infused with urethane microspheres.

The face uses a traditional Callaway 360 face cup. At the same time, the strong loft has also been achieved, so the EPIC FORGED STAR iron demonstrates tremendous flight distance performance. Of course, the 360 ​​face cup also reduces the flight distance loss at miss-hit.

An EPIC FORGED STAR iron that achieves overwhelming flight distance performance, but as the name of Forged, it uses a soft iron (S25C) forged body. Along with urethane microspheres injected at the bottom of the head, it is a major factor in creating the feel, sound and feeling of EPIC FORGED STAR iron.

- RELEASE DATE: August 30, 2019 ( Any orders before the release date are considered as PRE-ORDER )