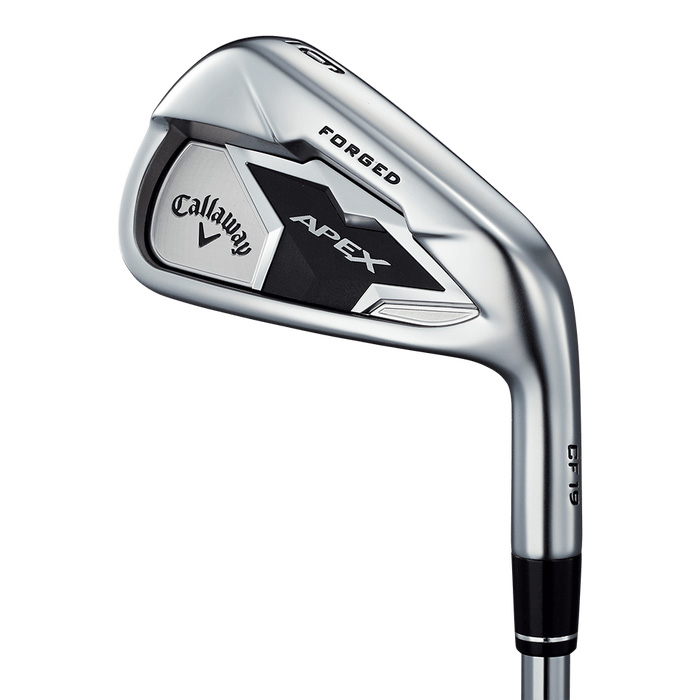 Introducing Callaway 2019 Apex Iron. Forged iron with an even greater flying distance than ever before, and the "APEX Iron" has undergone further evolution. The combination of a soft S25C soft iron forging body and a flying 360 face cup uses, for the first time, a urethane microsphere that has shown tremendous performance in ROGUE iron. Callaway realized a more soft feeling. In addition, tungsten inner weight is also mounted for optimum center of gravity position design. With all the best parts of forged and cast irons fused, an iron named "Apex" has now reached an unprecedented high position.

The new APEX Iron delivers incredible soft feeling. The factors behind this are the body created by forging the soft S25C soft iron and the unique urethane microspheres mounted on the forged iron for the first time. The soft iron forged body brings the APEX sound and feels to the touch, and the ROGUE iron has demonstrated its performance in urethane microspheres that absorb unnecessary vibrations and transfer energy to the ball without compromising the repulsion of the face. Improve.

For the face, Callaway's 360 face cup is adopted (I # 4-8). When captured in the core, as well as off-center hits, it produces stable and fast initial ball speeds, and brings flying that is unthinkable as soft iron forged irons. In addition, a short iron to wedge (I # 9, PW, AW, SW) is equipped with a 17-4 stainless steel face. In the score making, it is possible to control the appropriate spin and ballistics.