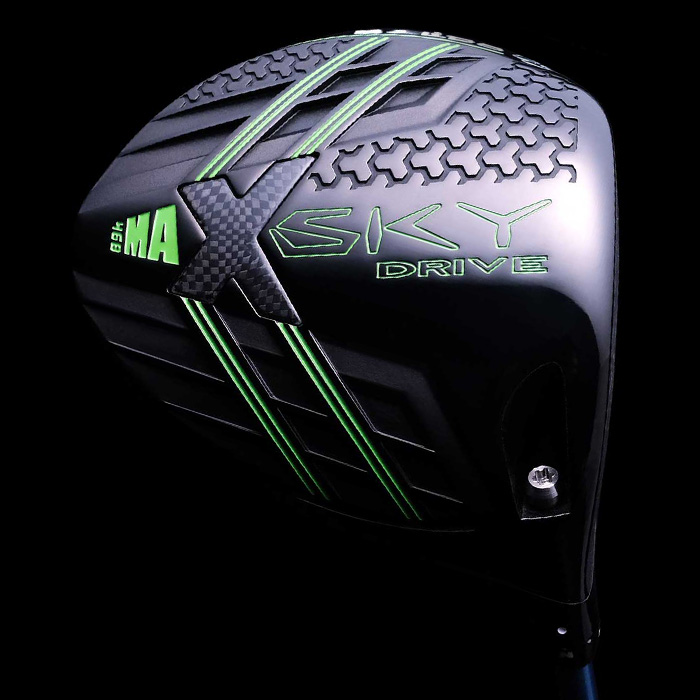 How to meet the core, the left and right angles of the face at the time of impact When the upper and lower angles are the most suitable, the ball flies in the target direction at a good angle while giving the maximum flight distance.

Of the "initial speed," "launch angle," and "spin amount," which are called the three elements of flight, the "initial speed" is greatly affected by the head speed. Is it possible to extend the flight distance for people whose head speed has slowed down? The decline in head speed can be covered by the meet rate. The "launch angle" and "spin amount" can be covered by the performance of the clubhead.

The bottom line is that your distance can still be extended. No matter how many times you hit it, Baldo wants you to experience the feeling of eating the core of the face. SKY DRIVE The name comes from the English word "THE SKY IS THE LIMIT", which says there is no limit to the origin. You can still fly, make your purpose of life shine.

Age shoot means that the score of one round of 18 holes in stroke play is holed out with the total number of strokes below your age. It is said that it is difficult to achieve it unless you are in your late 60s. There is no doubt that one of the factors for achieving the age shoot is the flight distance. No matter how old you are, as long as you are healthy, you can play golf aiming for an age shoot, and you want to create a driver for that, which is the reason why BALDO SKY DRIVER was created. What can Baldo do to satisfy golfers who have the guts to aim for an age shoot? The answer lies in SkyDrive.

This structure, which is said to be the so-called "Baldo hit feeling", grips the ball very softly at the time of impact and feels the force to push the ball strongly, gives the golfer the fastest initial ball velocity and the feeling of biting into the palm.

Although it has a body size of 460cc in head volume, it has a form that demonstrates excellent operability, and the sole surface has a traditional Japanese pattern, Bishamon turtle shell, and various designs to increase rigidity. A screw for adjusting the weight of the head is attached to the rear of the back face, and any club balance can be adjusted.

By installing a variable sleeve, it is possible to adjust the face angle, lie angle, and loft angle, and the optimum sleeve position for the golfer can be selected.

As shown in the table on the left, it is possible to derive the ball muscle that the golfer wants by changing the position of the variable sleeve, such as the height of the trajectory and the selection of the ball line of the draw fade.

The shaft for the exclusive use of SKY DRIVE is composed of ultra-high elasticity 70T carbon and high elasticity carbon in order to maximize the speed of bending and returning of the strong shaft. By doing so, when swinging at the same head speed, it is possible to improve the head speed and maximize the initial velocity of the ball. By using ultra-high elasticity 70T carbon cloth at the tip of the shaft, hitting and losing at the time of off-center hit is suppressed, and even though it is a lightweight shaft in the 40g range, the low torque of 3.8 suppresses twisting and blurring of the head. It achieves the best response, playing feel, and excellent ball control performance as well as flight distance performance.

- Dedicated shaft available as an option,